We recently announced our offering of Gil Bailie’s two part series Reflections on the Poetry of W. H. Auden. The New York Times has also recently published a richly formatted piece by Elisa Gabbert in which she presents her own exploration of one Auden’s more well known poems, Museé Des Beaux Arts, and a painting by Bruegel mentioned in the poem. I found both the dramatic formatting and the insightful critique helpful in appreciating this poem on suffering. The techniques involved in the presentation might be something we could utilize in our work. Click on the link below to fall into this immersive experience.

This might also be an appropriate time to reprise a post from a couple of years ago on approaching Holy Week in which other paintings of Bruegel were the focus of attention, The Fight between Carnival and Lent, and The Procession to Calvary. The latter being an imaginative visual narrative immersion into the painting and story.

New in our Store…Reflections on the Poetry of W.H. Auden

We have added an new item to our catalog of recorded presentations from Gil Bailie’s audio archives – Reflections on the Poetry of W.H. Auden. This 2 part series recorded in January 1990 explores a number of Auden’s poems beginning with selections from the War Sonnets (or Sonnets from China). In the 1930’s W. H. Auden and Christopher Isherwood visited China under the auspices of their British publishers to report on the Sino-Japanese war.

Mr. Bailie also provides insights on the poem September 1, 1939 (the date of Hitler’s invasion of Poland). The current war in Ukraine following Russia’s invasion lends a stark backdrop to Auden’s poems in this series. Gil Bailie quotes the critic A. T. Tooley that, for Auden…“faced at the end of the decade (of the 30’s) with the full horror of power, even in what he felt to be a just cause (like the Republican cause in Spain) the only road for Auden away from his ambivalence towards power was acceptance of humility and self-effacement as higher values. And the way to this was through Christianity.”

(Note: W. H. Auden frequently edited, often making substantial changes, the text of his poems. Gil Bailie is using in these talks a published collection that contains earlier versions of some poems.)

Listen to an excerpt:

Posted in Blog | Tagged poetry, W H Auden | Comments Off on New in our Store…Reflections on the Poetry of W.H. Auden 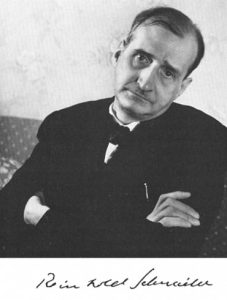 “Surely no worse fate can befall a people, and thereby the world, than the rule of a man who is secretly resolved to destroy himself, whether consciously or unconsciously. There is virtually nothing that can stop him from generating death. Those who meet him fall into his trap; those who celebrate him praise death without wanting to.”

– Reinhold Schneider
Perhaps there is one fate that is worse: to have weapons of mass destruction in the hands of several such figures at the same time. It might well drop us to our knees, where we belong.
Posted in Blog | Tagged death, fate, Reinholt Schneider | Comments Off on No Worse Fate

The Frankfort School and Critical Theory . . .

Posted on March 12, 2022 by Gil Bailie
Max Horkheimer was a German philosopher and sociologist and leader of the famous Frankfort School where Critical Theory was born. Since the West is now awash in the residue of that toxic brew, we are indebted to Bradley A. Thayer for providing a quick sketch of its impact on the matter at hand:

“Horkheimer…wanted to discover why [the proletariat in the West] were not behaving as Marxist thought required. The answer was the bourgeois family.…In particular, the role of the father and his authority needed to be undermined. This was necessary because of the indispensable education for authority that occurred in the patriarchal family. The family, as the “germ cell” of bourgeois culture, had to be undermined, destroyed, and reconstituted.…Accordingly, the family and civil society must be targeted, weakened, and transformed into a progressive force or else their traditional roles must be eliminated.”

Posted on March 10, 2022 by Gil Bailie
The Polish philosopher Ryszard Legutko points out an irony that can hardly be lost on anyone seriously observing contemporary affairs:

“Once eccentricity became the fashion or the norm, it unleashed a wave of collectivism, not creativity. Throngs of self-proclaimed eccentrics shouting the same slogans against every form of real or imagined ancient régimes have always made a rather depressing spectacle of human conformity.”

Posted on March 10, 2022 by Gil Bailie
Writing of the cultural and spiritual situation at the beginning of the last century, Henri de Lubac has aptly captured our present situation:

“In the misleading calm that marked the last years of the liberal period, before the era of catastrophes, of social agitation and spiritual upheavals opened by the war of 1914, minds flew into passion…New solutions were sought, which were only mirages. Many were the victims of this collective dizziness.”

When earthly certainty sees decline and doom as inevitable …

“[The power of faith] becomes most visible where the secular power begins to dwindle, where earthly certainty sees decline and doom as inevitable. It is here that its line intersects the sinking human curve and draws up out of it what must be salvaged. This faith is the end of psychology and of world history, revaluing all downfalls because these can be the decisive dawns of the invisible salvation…the downfalls remain what they are: a humiliation and a disgrace unto death. But they are woven about with the mystery of germination, indeed, of public triumph; in God’s eyes they are not what they appear to be on earth.”

“The Holy Spirit reveals to each age that side of the divine truth which has been specially reserved for it, if the age strives for it in prayer. And this truth does not then lie in some out-of-the-way corner that has so far happened to remain unnoticed and is only now lit up by the Spirit. It is always in the center, in the fiery furnace whence the light radiates, from where Christians have strayed unawares into ease and comfort, and into which they must return.”

“It is evident that Christianity, however degraded and distorted by cruelty and intolerance, must always exert a modifying influence on men’s passions, and protect them from the more violent forms of fanatical fever, as we are protected from smallpox by vaccination.”

“While regretting the absence of great figures in our time, we must not forget the army of those nameless ones who suffer in silence, who have offered, and are still offering, a burnt sacrifice that is generally overlooked, in war and deportation, in camps and torture, victims of the totalitarian powers, externally undistinguished from their unbelieving or weakly believing brethren.”