Posted on November 23, 2019 by Randy Coleman-Riese

Thank you to those who have responded to our Fall Appeal so far! We are grateful to all who find our work worthy of support. In our annual appeal I listed a number of Gil Bailie’s earlier presentations that remain to be brought into the digital age, but I was recently reminded of another important series… 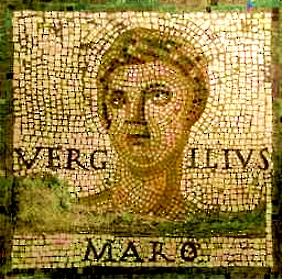 Below is an item from our old Reflections on Faith and Culture weblog which was originally posted 13 years ago.  It reminded me that another of Gil’s presentations from the 1990’s that is awaiting transfer to digital formats: The Truth of Poetry series on Virgil’s Aeneid.

(The word ‘florilegium’ and the word ‘anthology’ are the Latin and Greek forms of the same concept.)

As some of my older friends know, for several years the work I do now under the auspices of The Cornerstone Forum had another name: The Florilegia Institute. A florilegium is a collection of texts, an anthology of quotations. I used the term in the early days because an old friend of mine, Geoff Wood, and I once long ago did a series of joint presentations, and we called the series a florilegium. Because in those years I was leading explorations in various literary texts, and because my modus operanti was to place the texts in some kind of dialogue with one another, The Florilegia Institute seemed an apt name for what I was doing. For instance, I gave a series of classes in those days comparing the Gospel of Luke with Virgil’s Aeneid. The series was called “The Poetry of Truth and the Truth of Poetry,” the former a reference to Luke’s Gospel and the latter to Virgil’s poem. The problem was, of course, hardly anyone knew what the word florilegia meant. It’s aptness notwithstanding, it was confusing.

Since then the work has evolved into another phase, and a few years back we changed the name of our mission to The Cornerstone Forum.

…I will be doing my part of the Forum’s work from home for the time being. In dealing with increasing time constraints, I may often make posts to this weblog consisting simply of quotations that I think are worth sharing. That’s pretty much what a florilegium is.

I may or may not be able to resist the impulse to gild the lily with an observation of my own about the quotation, and I may not have time to indulge that impulse — as I just have — in any case.

Let me inaugurate this weblog feature with the following quotation:

“The acquiring of religious knowledge is akin to learning a skill. It involves practices, attitudes, and dispositions and has to do with ordering one’s loves. This kind of knowledge, the knowledge one lives by, is gained gradually over time. Just as one does not learn to play the piano in a day, so one does not learn to love God in an exuberant moment of delight.”