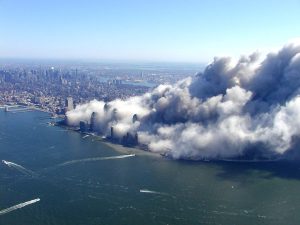 Remembering the 50th on the 5th

(this was initially posted on our old blog site on September 11, 2006)

My father was killed in the Battle of the Bulge on January 7, 1945 a few months after I was born. I have not been particularly preoccupied with the details of that utterly senseless slaughter, though some years ago I was able to visit with the people with whom my father and his fellow soldiers spent the Christmas of 1944. My visit just happened to coincide with the 50th anniversary of the liberation of Europe, and there was considerable attention given to the closing days of World War II at the time. I was received by the local farmers as a hero, as they bestowed on me the gratitude they felt for the sacrifices made by Americans on their behalf.

At no time during my visits with the Belgian farmers, or in what I saw and heard on the various BBC programs dealing with the liberation of Europe, do I recall the word “tragedy” being used. Was it a tragedy that 19,000 Americans lost their lives in a battle that had no chance of changing the outcome of the war? Well, at one level, yes. But the word “tragedy” might best be reserved for things like hurricane Katrina. Tragedies happen. When tanks roll and cannons fire and machine guns blaze and bombs fall, it’s because the decision has been made for those things to happen.

As we commemorate the fifth anniversary of the mass murder that occurred on September 11, 2001, I have already heard the word “tragedy” used several times. No one can deny that the events of that day were terribly tragic for the families and friends of those who died in the attack, just as my father’s death in a German bombing raid was a terrible tragedy for my mother. Use of the word tragedy, however, can reinforce an already prevalent tendency to ignore the fact that those who died in lower Manhattan five years ago were killed by mass murderers, and their deaths were jubilantly celebrated by dancing in the streets in the Muslim world.

CNN’s chief international correspondent, Christiane Amanpour recently spoke with Michael Scheuer, the former head of the CIA’s bin Laden unit. Scheuer told her that he had learned that Osama bin Laden has recently been given permission by a cleric in Saudi Arabia to use nuclear weapons against the United States, “capping the casualties at 10 million.” The dumbfounded Amanpour asked Scheuer: “He’s had a approval, a religious approval for 10 million deaths?” “Yes,” Scheuer told her.

We have every reason to vigorously debate the morality of this or that domestic law or policy, on one hand, or this or that foreign policy or military adventure of our nation or any other nation, on the other. We needn’t agree with the policies of our own or any other government; it goes without saying that many will strongly disagree. It would be a very dangerous world if it were ever to be otherwise. That said, however, there is a world of difference between policies aimed at preserving and protecting a society – however misguided these policies might conceivably be – and policies that are explicitly and unapologetically murderous and genocidal.

We may disagree sharply on how to respond to the new forms of genocide that have emerged in our day. The actions of the U.S. and of other Western nations and institutions may at times be unconscionable, and vigilance is the watchword. It is not out of the question that, as in the case of Hiroshima and Nagasaki, the West might commit appalling atrocities in its attempt to prevent the atrocities the jihadist are now planning and committing. The powerful mimetic dynamic that operates in such conflict is terribly dangerous and not to be overlooked. But to imagine that a moral equivalence exists today between the West and the jihadists is to forsake reality and renounce the only moral progress for which we can legitimately hope.

What we must never forget, of course, is that we are all God’s children; none of us is immune to the seductions that lead to hatred and violence. But awareness of our moral predicament and the fallibility of our judgment does not absolve us of our responsibility to protect the innocent as best we can from those maddened by racial hatred and pathological forms of religious zealotry. The more clearly we recognize the threats from which we must try to protect the innocent, the more reason we have to remember St. Paul’s reminder that it is not against flesh and blood that we struggle, but rather against spiritual forces to which we ourselves are never immune. That those who have fallen under the influence of these forces are brothers and sisters of ours does not mean that we should not repel them as best we can and prevent the damage they will otherwise cause, but it does mean that we must not loose sight of their humanity and our kinship with them.

For our struggle is not with flesh and blood but with the principalities, with the powers, with the world rulers of this present darkness, with the evil spirits in the heavens. Therefore, put on the armor of God, that you may be able to resist on the evil day and, having done everything, to hold your ground. So stand fast with your loins girded in truth, clothed with righteousness as a breastplate, and your feet shod in readiness for the gospel of peace. (Ephesians 6: 12-15)

Christians and Jews understand that history will all too often be the arena of crushed hopes and broken hearts. Knowing that, however, is the precondition for recognizing one of the greatest gifts of Christian faith, namely, the sure knowledge that where sin abounds, grace super-abounds, and that none of the suffering in history is meaningless, however inaccessible that meaning might be to those in the midst of the suffering. “My God, my God, why have you forsaken me?” That such cries are heard by a loving and all-caring God, a God who will in the end wipe away every tear, is the bedrock of Christian hope.

To those who struggled up the stairwell of the North and South towers of the World Trade Center with fire-fighting equipment, and to those, like my father, against whom Hitler’s last mad murderousness spent itself, the world owes its respect and gratitude. In neither case did they die in a tragedy. They died rather in a struggle to preserve civilization and protect the innocent from the barbarians threatening them. We have not seen the last of such things, and we have almost certainly not seen the worst of them. If we are to face today’s historical exigencies responsibly, we will need to summon an uncommon measure of faith and fortitude.