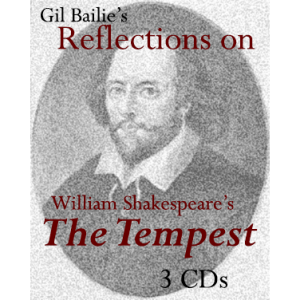 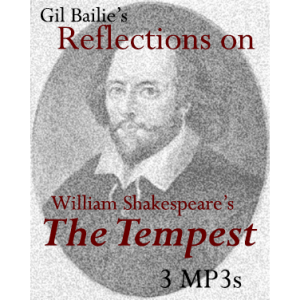 New to the Cornerstone Forum Store

This is the last of Gil Bailie’s Reflections on the works of William Shakespeare – and appropriately The Tempest was the Bard’s final play.

All those who have signed up for our episodic email newsletters (4 or 5 times a year) are receiving with this month’s emailed newsletter complimentary downloadable MP3 audio files for the 3 part series on The Tempest. If you would like to keep up with the goings on of the Cornerstone Forum and also receive an occasional free MP3 or discounts on items from our store please sign up for our newsletter below.

For Email Marketing you can trust. 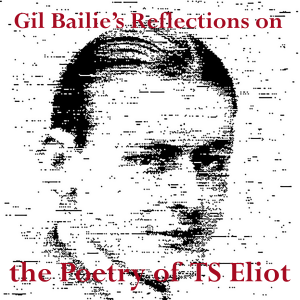 Coming in the Fall will be Gil Bailie’s reflections on the works of TS Eliot including a series on some of Eliot’s early poems The Love Song of J Alfred Prufrock, Geroniton, and Sweeney Among the Nightingales. Later this year we plan to add The Waste Land, and then in the new year The Hollow Men, Ash Wednesday, and Murder in the Cathedral.

Culture: The Canary in the Gemeinschaft

The following is reprised from a blog posting originally made in September 2006. We believe its relevance to our contemporary situation makes it worth re-posting. The impetus for this came out of discussions at the Friday afternoon Girard seminars held episodically on the campus of Stanford University from the late 1980s to 2010.

In a lengthy article in the current issue of The Weekly Standard, Ralph Peters touches on one of the issues I raised at the last Girard seminar at Stanford and alluded to in the last Cornerstone Forum Newsletter. The issue is the erasure of cultural difference that accompanies today’s globalization and what the likely consequences of that erasure might be. Peters says some very pertinent things, for instance, that “there is a worldwide vacuum of purpose that the glittering trinkets of globalization cannot fill,” and: “The conviction that a new man freed of archaic identities and primitive loyalties can be created by human contrivance is an old illusion.” This illusion, having been entertained altogether too naively by the globalizing elites, is now collapsing into new forms of tribalism, which Peters conflates with magic or magical thinking, something he feels is likely to neither disappear nor be understood by the elites who convinced themselves that it would.

There is much merit to the argument Peters is making. It is a specification of the longstanding realization that humans are inherently religious beings, the default position on human religiosity being the primordial forms, from which biblical thought generally and the Christian revelation specifically exist to liberate us. There is a good deal of liberation from these primitive forms of the sacred yet to be done, and, even where the biblical and Christian leaven has been long at work, there remain vestiges of archaic religiosity which, under the pressure of social dislocations, are capable of revival and resurgence. One of the circumstances which favors the revival of these vestiges is the attenuation of a palpable sense of “we-ness,” a sense of social and religious belonging, and it is precisely this loss of social identity that has accompanied the globalization of the last few decades.

The mere fact that people exist “side by side, imprisoned on the same earth’s surface,” Hans Urs von Balthasar insists, does not constitute a viable community, and, if left with no bonds other than that, the soul will eventually rebel, seeking more palpable, visceral, and meaningful forms of communion. The impulse to retrieve such a communion can easily and quite naturally become retrogressive. A healthy sense of communio, von Balthasar argues, will be the precondition for all kinds of lively interactions, arguments, disagreements, and so on, the social container for a give-and-take, not an enforced sameness, which is what is currently being fostered by the globalizing elites wherever they have attained the power to do so.

Contrary to the anthropological naïveté of the social engineers, true community is not a social-contract arrangement. One’s family, or village, or nation are given. As Hans Urs von Balthasar puts it:

Those who are in “communion,” … do not enter into such a social relationship solely on their own initiative, each of his own private accord, determining its scope by the stipulations they make when they establish it. They are already in it from the start, already mutually dependent a priori, as a matter of course, not only to live together and contrive to get on with one another in the same domain, but also to carry out a common activity. … Otherwise, “L’enfer, c’est les autres” – “Hell is other people.”

There is, Ralph Peters argues, widespread “popular discontent with pseudo-identities concocted by political elites.” Globalization, he writes, “enthralls and binds together a new aristocracy – the golden crust on the human loaf – but the remaining billions, who lack the culture and confidence to benefit from ‘one world,’ have begun to erect barricades against the internationalization of their affairs.” We are, he writes, “witnessing the return of the tribes – a global phenomenon, but the antithesis of globalization as described in pop bestsellers. The twin tribal identities, ethnic and religious brotherhood, are once again armed and dangerous.”

However much we might wish it were otherwise, it is nonetheless true that we humans love one another with different levels of intensity and commitment. Cultural realism requires us to recognize this fact. It’s like the law of gravity; ignoring it will not make it go away. Whatever subtle presuppositions might be operating in utopian forms of egalitarianism or meritocracy, the truth is that one always tends to love one’s spouse and one’s children better than one loves others. As Christians, we can and should try to compensate for this natural affective asymmetry, but the first thing one must do in order to compensate for it is to recognize its existence. Of course, most of us recognize the domestic version of it, but we may not realize that the family is simply the inner core of a series of concentric circles of particular affection which quite naturally exist. Extended families, clans, ethnicities, nationalities, religious affinities, and so on and so forth; these things are the bonds that bind us, fostering the social intimacies that make us human. Accepting them and appreciating them is not a synonym for xenophobia. Someone secure in his or her matrix of relationships will meet those embedded in unfamiliar cultural matrices with a good deal more openness than will those floating in a sea of social undifferentiation. If and when these bonds become too attenuated, a hunger for them is aroused which eventually may seek satisfaction by reviving archaic forms of it by way of hatred and violence.

What Peters means by “magic” is more or less what René Girard means by the sacred, using the word with an anthropological, not pious, connotation. To distinguish these contexts, Girard often uses the phrase “the primitive sacred” to refer to the combination of superstition, violence, and ritual upon which archaic societies (past and present) depended for the maintenance of social solidarity and political order. Whether it begins with the southern European Renaissance or its northern variant, the Reformation, the process we now call secularization has been underway for centuries. It was driven by Christian desacralization which it misunderstood and misappropriated. Now that that process has run its course, what is becoming clear is something I’ve been harping on for years: the secular is not a sustainable alternative to the (primitive) sacred. If those are the only two alternatives on offer, a top-down choice in favor of the secular will serve simply as the prelude to a bottom-up demand for the sacred, the ferocity of which will be a measure of secularism’s anthropological naïveté.

It is with this as historical backdrop that we can and must rediscover the absolutely unique anthropological significance of Christian sacramentality. For the true alternative to the (primitive) sacred is the distinctive form of sacramentality which it has been the historical privilege of catholic Christianity to awaken in believers and propose to the world. One is tempted to put it emphatically: Ultimately, the only alternative to magic is the Eucharist.

The reality of Jesus’ eucharistic self-communication at his Last Supper and in the communion of those who take part in the meal which is established – not in any case magical, but sacramentally objective and inseparably constituting both communion with God in Christ and communion with one another (1 Cor 10:16ff); this opens out a possibility of living for others which exceeds purely human capacity because it is a sharing in Christ’s vicarious suffering for the Church (and thereby for all men) (Col 1:24), involving sharing a common lot with the Lord …

What is today becoming clear, and what Ralph Peters has seen through a glass darkly, is that the secular is a brief interregnum which will dissolve in due course into a religious revival, the only outstanding question is: around which religious tradition will that revival occur?

Neither ideological secularism nor the ferocious revivals of the sacred that recoil from its banality and vulgarity are capable of inspiring the spiritual and cultural revitalization that our present situation demands. The alternative to the contemporary secular wasteland is not the intoxication and fanaticism of sacred violence but the sacramental forms of religious self-donation that it has been the distinctive historical privilege of Christianity to foster.

This entry was posted in Blog and tagged belonging, communion, community, globalization, Hans Urs von Balthasar, newsletter, René Girard, Shakespeare, The Tempest. Bookmark the permalink.
This website uses cookies to improve your experience. We'll assume you're ok with this, but you can opt-out if you wish. Cookie settingsACCEPT
Privacy & Cookies Policy