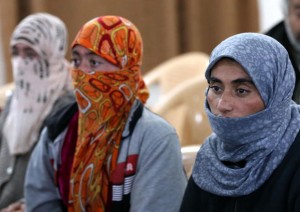 Yazidi women look on at Al-Tun Kopri health centre, located half way between the northern Iraqi city of Kirkuk and Arbil, after they were released with around 200 mostly elderly members of Iraq’s Yazidi minority near Kirkuk on January 17, 2015 after being held by the Islamic State jihadist group for more than five months. Medical teams from the Kurdistan Regional Government carried out blood tests and provided emergency care to the group of Yazidis, many of whom looked sick and distraught. Yazidi officials and rights activists say thousands of members of their Kurdish-speaking community are still in captivity. AFP PHOTO / SAFIN HAMID

Here is yet another reminder that evil exists and that it grows in strength and moral depravity until it is stopped. In this case, it has an indisputable religious element. In fact its religious element is paramount, but our leaders cannot bring themselves to acknowledge this.
“IS splits women from men and executes boys and men aged 14 and over. The women and mothers are separated; girls are stripped naked, tested for virginity and examined for breast size and prettiness. The youngest, and those considered the prettiest virgins fetch higher prices and are sent to Raqqa, the IS stronghold.”