A Coda on COV&R in Innsbruck (present and past…) 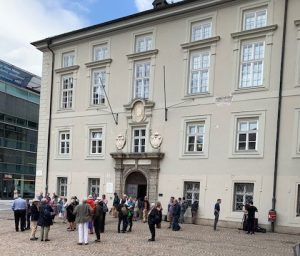 Bleary eyed after 24 hours of travel from Austria to San Francisco the accumulated work of two weeks away from the Cornerstone Forum office awaits me. Before I dig into the pile of paper, emails, and related chores I would like to reflect on the conference that ended last week and on a prior COV&R conference from sixteen years ago, also held at Innsbruck.

The theme of this year’s meeting, “Imagining the Other: Theo-Political Challenges in an Age of Migration”  highlighted the on going issues facing many countries in Europe and the Americas where large numbers of people from the middle-East, Africa, and also Mexico, Central and South America are moving. There were at least 56 individual presentations including plenary and break-out sessions at this year’s conference. Emphasis on the scapegoating behaviors of some of the countries receiving large numbers of immigrants was prominent in the presentations, as would be expected in a Girardian setting such as this. Also in evidence was a propensity to ‘scapegoat the scapegoaters’ or in at least one instance to make the purported scapegoating behavior appear other than it was in fact, as when in a presentation the 2009 conservative Swiss People’s Party (SVP) poster of the Swiss flag covered in menacing bayonet like minarets was said to be an example of the Islamophobic scapegoating of immigrants, when in fact it was a faithful representation of Turkey’s president Erdogan’s perspective in 1997, where he quotes an early 20th century Turkish nationalist, saying, “The minarets are our bayonets, the domes our helmets, the mosques our barracks and the faithful our army.” It was therefore reasonable that some within Switzerland felt threatened by the growing presence of mosques in their towns. When this was pointed out to the presenter there was just silence…no explanation, apology for the oversight or appreciation for the correction. 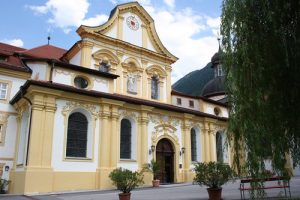 One of the ironies of viewing any concerns about the influence of Islamic immigrants as scapegoating came during the final event of the conference at the magnificent (if overwhelming, to me at least) baroque Stams Stiftsbasilikia where we attended a wonderful and inspiring concert by the Regensberger Domspatzen. It was at this place in 1497 that representatives of the Ottoman Turks signed a peace treaty with the Holy Roman Emperor Maximilian I. In the museum at the site this historic event and its consequences was described for visitors, concluding with this: 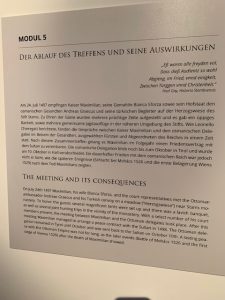 A lasting peace with the Ottoman Empire was not for long, as the later events (Battle of Mohacs 1526 and the first Siege of Vienna 1529) after the death of Maximilian showed.

The truth of any current or historic situation is complex. Any one observer will surely miss some aspects of the event. Mimetic Theory, as the name implies, understands mimetic desire as the source of conflicts resolved in scapegoating mechanisms. It is a tool enabling us to understand human actions, especially in the collective, describing the myths, rituals, and prohibitions that come out of the conflicts and violence inherent in our species and which help mitigate their destructive effects in the form of religion. And as a tool it is only useful if it ‘works’, if it helps us understand reality,…if it is true.

Below is a poem by Richard Wilbur that deals with our epistemic challenge, or how we often run into difficulties when reality does not conform to our beliefs…and following that a report Gil Bailie gave on the COV&R conference in 2003 also held at Innsbruck, including recorded remarks by René Girard on the importance of truth.

I.
Kick at the rock, Sam Johnson, break your bones:
But cloudy, cloudy is the stuff of stones.

II.
We milk the cow of the world, and as we do
We whisper in her ear, ‘You are not true.’

I am writing from Innsbruck, Austria where the Colloquium on Violence and Religion has just concluded its 2003 annual conference. The conference was a rich one, with more than 70 papers delivered. The discussions both formal and informal were wonderful. It was only at the very end of the conference that an issue arose that seems to arise everywhere these days where serious attention is paid to the Gospel and its cultural consequences. In so many places today, pluralism is besieged by people who ardently feel they are defending pluralism. In fact, pluralism is being redefined as the value to which all other values must defer. But in the topsy-turvy world of postmodern thinking, it is precisely postmodernity’s supreme principle of pluralism which cannot be exported to other cultures without violating the multicultural premises upon which it is currently based.

One needs to be reminded that pluralism is not a “truth,” rather it is the social arrangement most suitable to the charitable quest for truth. When and where a doctrinal pluralism censures that quest, it becomes — like so many other late-modern and post-modern “good intentions” — a parody of itself. I say this, all too quickly no doubt (I am pressed for time in these last few hours in Austria), in order to introduce a few remarks that René Girard made at a panel discussion at the end of our conference. I am putting a streaming audio player of the recording below where you can listen to René’s remarks, as well as a transcription.

One of the panelists expressed discomfort with the distinction Girard has always made between “myth” and “revelation,” suggesting that by privileging “truth” Girard and Christians generally set up a conflict with those who might not affirm that truth, thereby contributing to the very violence which they purport to be resisting. René’s interlocutor said that “The message of the market has become the market of the messages,” implying that the free flow of this information-age exchange would be jeopardized by attempts to privilege any one message the way Christians privilege the Gospel and insist on its universality and uniqueness, and the way Girard privileges the mimetic theory as both the product of the Gospel revelation and, in turn, its best anthropological explicator.
René responded with remarks that lasted slightly over four minutes. The recording I was able to get of his response is not of the very highest quality, but I think you will find its mediocre audio quality a small price to pay for the profound but perfectly simple and obvious truth to which he calls our attention.

“You know I find this debate very interesting on a certain level, but unconnected at all with the mimetic theory at other levels To put, in a way, all these messages more or less on the same level without asking the question of truth and falsity is the basis of our entire culture today. So, there the mimetic theory is totally misunderstood in the sense that the mimetic theory is entirely about the question of truth or falsity. Therefore, it has to disregard, in a certain way, the question of whether it’s going to cause controversy or not. I think one has to take a scapegoat example which would be modern enough to still be meaningful to us in terms of being for or even against injustice, and in those cases I always take the Dreyfus case.

“In the Dreyfus case you can see that the anti-Dreyfus theory which triumphed in France for years supported by the government and so forth was a perfect myth in the sense that there was a victim who everybody thought was guilty and who in reality was innocent. The first people who said that this victim was innocent suffered for it in the same sense we might say that the prophets suffered for the truth, Christ suffered for the truth. In the Dreyfus vision of mythology is the exact counterpart of the anti-Dreyfus…they resemble each other extremely. But there is one little difference the importance of which we don’t see in the case of religion and we see very well in the case of Dreyfus. Was the victim really innocent? Did he deserve to be punished or not? The only question is that. Oedipus is supposed to be guilty… this is a myth. Judaism and Christianity always call myths lies and they are right! And Judaism and Christianity say that the opposite, the vindication of the victim, is true, period. Nothing else matters. And that’s all. See what I mean? If you get away from that you’re off course. We are all trying to get along on avoiding the question of truth, and in a way it is very understandable and it’s still the philosophical way. We should avoid talking about religious violence; you know– the Platonic way. We are all for it because our instinct tells us, in a way, it is the only way you can have peace today. But I think at the same time it’s false in the sense that the account of the passion, if you read it, is exactly the truth of these myths which these myths do not give you. I think there is one man who understood this Christological sense, paradoxical, of the Dreyfus case and his name is Charles Peguy and he saw it as a Christological affair, which is very mysterious to a lot of people ? ‘vindication of that Jew’ and so on ‘should we be anti-Semitic?’, ‘we’d be better Christians‘ and so forth….no, only the truth counts. This is it.

“Either the mimetic theory has nothing to do with what I have just said, in that case its pure bunk, and has no interest whatever, or it has something to do with it. And of course, I think it has a lot to do with it, that it is really the same thing.”

This entry was posted in Blog and tagged Charles Péguy, Colloquium on Violence & Religion, immigration, Innsbruck, Islam, René Girard, Richard Wilbur, scapegoats, truth. Bookmark the permalink.
This website uses cookies to improve your experience. We'll assume you're ok with this, but you can opt-out if you wish. Cookie settingsACCEPT
Privacy & Cookies Policy