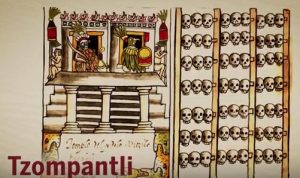 Monumental Aztec Edifice of Skulls of Their Sacrificial Victims

One of the great values of what John Paul II called the Splendor of Truth is that it shatters even the most impervious ideological barriers erected to hide it.

A recent archeological find in Mexico City detailed in Science magazine (to view a short video and read the article click on the image to the left) has confirmed the existence of a Tzompantli – a monumental display of thousands of skulls of sacrificial victims. Some scholars had believed it to be a figment of the Spanish conquistador’s  imagination, or perhaps an exaggeration meant as a slur against the indigenous people of Tenochtitlan – the chief city of the Mexica culture.

If we could line up the millions of unborn children killed on the stainless steel altars of the abortion industry we might be able to recognize the return to pagan principles that is occurring in a once Christian civilization.

The truth will set us free.