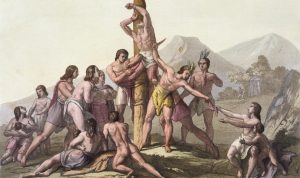 The following comes from an article posted on The Atlantic magazine website:

In 1598, a European miner working in the Bolivian highlands stumbled across a 10-year-old Andean girl who was still alive, despite having been walled up inside a funerary tower three days earlier. Several decades had passed since the Inca Empire—the most sophisticated in the world at that time—had fallen, but its practices lived on among the Incas’ descendants in the region, including human sacrifice. The practice held on a little longer after this incident. Around 20 years later, a boy, who had escaped from local chiefs attempting to bury him alive, took refuge in a Spanish community in the Peruvian Sierra. But the tradition was incompatible with the moral outlook of the new Catholic regime, and die it did, eventually.

The question scientists are debating now is: Did our modern world spring from the beliefs of those who buried the girl alive, or from those of the miner who freed her?

To put that question another way, were human societies able to grow so large and complex because cruel practices like human sacrifice shored them up, or because human sacrifice was abandoned in favor of other forms of social glue—notably, major religions like Christianity?

What seems clear is that the author of the article and, likely, the scientists in the debate are unfamiliar with the work of one scholar who spent most of his life studying violence and religion and the origins of human culture, René Girard. The article describes research being conducted by teams of university based scholars mining the data from anthropological studies of thousands of primitive cultures both living and extinct and pooling the information in vast databases. Without the tools that Girard’s work provides it is not surprising that the researchers fall into the materialistic and utilitarian hypotheseses regarding us humans and our social interactions. Perhaps you have heard of ‘big data’ and, like many, have relegated that term to the realm of topics too vast to spend much time worrying about; while at the same time finding it somehow worrisome. I have my own qualms in this regard, however it is possible that big data may in this instance provide another layer of emperical support to Girard’s mimetic theory of the origins of human culture.