Posted on December 7, 2017 by Randy Coleman-Riese 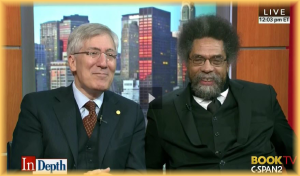 Last Sunday I happened to watch an hour long CSPAN interview with Robert P. George and Cornel West. It was not what I expected; which was verbal combat between scholars occupying opposite ideological perspectives. Over the years I had read a number of articles by Professor George, who teaches at Princeton, and knew him as a gifted Catholic scholar whose outspoken pro-life, natural law, politically conservative positions have influenced my own thinking. Professor West of Harvard, on the other hand, I knew only from news media accounts, having never read anything he had written that I can recall. However, by his reputation as a political progressive of the left I felt the CSPAN program would provide some verbal fireworks, at least.

What transpired surprised me. I encourage anyone who despairs of high level respectful discourse between ideological opponents to click on the image above to watch the program. It will not be lost on the viewer that both of these men are Christians whose views have been formed by their faith. But it is also evident that the manner in which they hold their differing views on many issues is saturated by a grace that enables them to live and work together as brothers in Christ.