Posted on November 18, 2015 by Randy Coleman-Riese 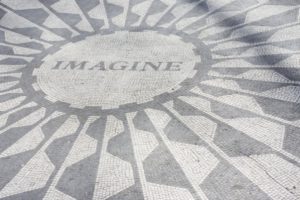 How brain-dead is the Western cultural elite?

As hundreds of mourners gathered outside Paris’ Bataclan venue, where a terror attack at an Eagles of Death Metal show resulted in the death of 118 people, an unknown musician set up a grand piano outside the concert hall and delivered a poignant, instrumental take on John Lennon’s “Imagine.” A peace sign adorned the musician’s piano.

Flowers, candles and memorials were also set up outside the Bataclan, the epicenter of the deadliest day in France since World War II. Lennon’s 1971 classic features the lyrics “Imagine there’s no countries / It isn’t hard to do / Nothing to kill or die for / And no religion too.” Those lyrics especially resonate in the aftermath of the Paris terror attacks, a massacre perpetrated by the Islamic State (ISIS).

You won’t be surprised that the above encomium, complete with not one but two vids of the Lennon-addled pianist doing his thing, appears in Rolling Stone, the magazine where…oh well.

“Imagine there’s no countries.” And that’s why ISIS, which has taken credit for orchestrating the Paris massacres, calls itself  the “Islamic State”:

The Islamic State claimed responsibility on Saturday for the catastrophic attacks in the French capital, calling them “the first of the storm” and mocking France as a “capital of prostitution and obscenity,” according to statements released in multiple languages on one of the terror group’s encrypted messaging accounts.

ISIS seems to have a bit of a problem with imagining that “there’s no countries.”

And so, fortunately, does France:

The French air force carried out bombing missions on ISIS targets in Raqqa, Syria, for a second day in a row. France is retaliating against Islamist extremist terror attacks that killed at least 129 people in Paris.

ISIS claims Raqqa as the capital of its so-called caliphate.

“And no religion too.” ISIS would agree with John Lennon on that one:

For more than a decade, extremists have targeted Christians and other minorities, who often serve as stand-ins for the West. This was especially true in Iraq after the U.S. invasion, which caused hundreds of thousands to flee. ‘‘Since 2003, we’ve lost priests, bishops and more than 60 churches were bombed,’’ Bashar Warda, the Chaldean Catholic archbishop of Erbil, said. With the fall of Saddam Hussein, Christians began to leave Iraq in large numbers, and the population shrank to less than 500,000 today from as many as 1.5 million in 2003.

The Arab Spring only made things worse. As dictators like Mubarak in Egypt and Qaddafi in Libya were toppled, their longstanding protection of minorities also ended. Now, ISIS is looking to eradicate Christians and other minorities altogether. The group twists the early history of Christians in the region — their subjugation by the sword — to legitimize its millenarian enterprise. Recently, ISIS posted videos delineating the second-class status of Christians in the caliphate. Those unwilling to pay the jizya tax or to convert would be destroyed, the narrator warned, as the videos culminated in the now-­infamous scenes of Egyptian and Ethiopian Christians in Libya being marched onto the beach and beheaded, their blood running into the surf.

The future of Christianity in the region of its birth is now uncertain. ‘‘How much longer can we flee before we and other minorities become a story in a history book?’’ says Nuri Kino, a journalist and founder of the advocacy group Demand for Action.

So–the best our cultural elites can do to memorialize the worst mass killing in France since World War II is a song whose lyrics are not only inane but an attack on patriotism and faith.

But even at Rolling Stone there’s some sanity–from the commenters on the above story. Here’s one:

Should have played the Soft Boys’s “I Wanna Destroy You.” Playing “Imagine” is a melodic way of saying, “Please kill me last.”

“Brain-dead” may be too kind a way to characterize our elites.